The John Seeber Memorial Sabre Teams Race was successfully conducted at Mordialloc on Saturday 7th April with 16 boats divided into 4 mixed teams of (hopefully) equal skills. The weather was light with a 3-5 knot southerly veering to a south easterly that eventually faded to near nothing by the end of the race.

Number 1 and 2 members of each team sailed a slightly longer course on the first lap. This gave the number 3 and 4 team members the experience of being at the sharp end of the fleet whilst giving the more experienced sailors the taste of being in the latter half of the fleet for at least some part of the race.

The fleet was  well bunched up at the end of the first race providing a good result for this type of format.It’s a format that would work at club races as it encourages Sabre members in the second half of the fleet to gain experience and continue to turn up each week.

There was only 4 points between 1st and 3rd teams that showed that the team selection process does work. 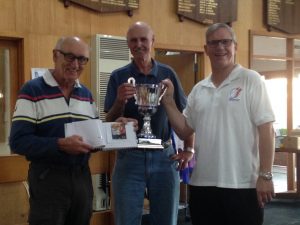 The 2018 Sabre Teams Race Winners from the left are:

The Teams trophy was presented along with the Photo album displaying previous race winners going back to 2014.

The top 3 boats from each team of 4 scores points.